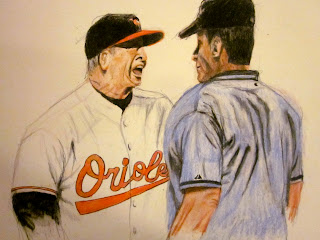 Long time Oriole's manager Earl Weaver passed away yesterday. I grew up appreciating Weavers managerial prowess and his ability to get the most out of his players. Although he got a lot of attention for his arguments with umpires, he managed to amass 1480 wins and a winning percentage of .583% in a managerial career that spanned two decades. Weaver's O's won the AL pennant on several occasions and a World Series in 1970.

Weaver was not without his critics. Hall of Fame pitcher Jim Palmer who used to spar with Weaver regularly once said of the manager, "The only thing Earl knows about a curveball is that he couldn't hit it". Weaver, never short a snap response shot back, "I've given Palmer more chances than my ex-wife".

American league umpires used to dread arguments with Weaver who would often kick dirt on them while unleashing a stream of colorful obscenities in their faces. Weaver was ejected from almost one hundred baseball games during his career and in one particular incident involving a, "bad call", Weaver yelled at the umpire, "I'm going to check the rule-book on that" to which the umpire replied, "Here, use mine." Weaver shot back, "That's no good - I can't read Braille."

Here for your listening enjoyment is the infamous, "underground" recording made by Weaver and then Orioles radio broadcaster Tom Marr as a goof back in the 1970's. (Please make sure the kids are covering their ears)